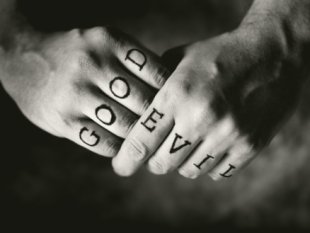 –Friedrich Nietzsche, On the Genealogy of Morality, 1887

I read a blog post this week by @RobVegasPoker about an obnoxious jerk at a poker table. It made me chuckle, but I also felt his pain, because anyone who has played live poker a few times will have come up against somebody who they felt was just a massive arsehole.

I usually read the comments on blogs, especially popular ones like Rob’s because they are invariably hilarious.
One comment did give me pause for thought, and it was this:

“Is it that there is a lot of scum in poker, or does poker bring out the scum in us?”

Poker is a game of deception and aggression, and if “nice guys” come last in life, they certainly come last in poker. A good poker player will routinely destroy his opponents and is not expected to feel anything approaching remorse about that.
In fact, if you do feel bad about taking your opponents’ money, preying on the weaker players and using whatever intellectual/social/mental means are at your disposal to achieve this end, you probably aren’t going to be a very good player. 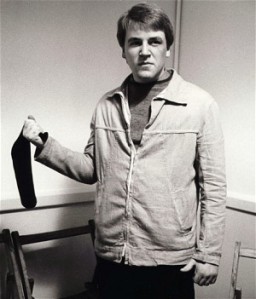 There is some evidence that people who register higher scores on Sociopathy tests are likely to have attributes that make for a good poker player, most notably a lack of emotional involvement.
“Sociopath” is generally not accepted as being a complimentary way to describe other people, but perhaps for poker players, it should be, because it is a way of saying that you display personality traits that increase the likelihood of you excelling at poker.

The behaviour of the guy detailed in Rob’s blog does not tie in with traditional Sociopathic definitions, because charm and/or the ability to socially manipulate others is a key trait of those described as Sociopaths.
Rob’s “obnoxious jerk” did not seem capable of charming anyone, and in fact Rob’s analysis that “he should be nice to people to keep them at the table” is, as well as being a far more sensible approach to playing poker with recreational players, a more traditionally Sociopathic response.
“I want something from you, I want to own you, and I’ll charm you so hard you won’t know it’s happening”; something or someone that seems “nice” isn’t always “nice”.

In certain environments and in different lights, it would seem that “bad” traits can become “good” ones, and vice versa.

I’m with Rob that this guy’s behaviour should not be allowed, but not because I care if some terrible poker player goes home crying with his ikkle wikkle fweelings hwurting, but because he might not come back and donate again.
Does that make me a bad person for good reasons, or a good person for bad reasons?

This confusion got me to wondering whether characters in the poker world  are particularly “bad” people, or, outside physically hurting someone, whether “bad” or “good” is simply a matter of preference and we should all be looking to associate with like minds, and not looking to find a universal quality of “goodness”.

There’s been a bit of a furore in the high-stakes poker world recently, surrounding money lending, agreements between friends and involving constant accusations of this person or that person being a total bastard.
I’m referring to the Dreyfus/Holz carry-on and the Polk/Tollerene brouhaha. I’ve watched videos and read blog posts, stuffing popcorn into my mouth and laughing my tits off.
I was particularly enraptured with Polk’s video… LOL! Mean Girls With Penises! I’m back in high-school!

I’ve often stated I don’t really care what high-stakes players do, they’re not my people, and I didn’t form opinions on any of those involved in terms of whether they were “bad” or “good”.
I think all parties made mistakes, and both situations are so removed from me that I can’t really care about them, so I’m not going to bang on about someone else’s business. (I’ve included some links at the end incase y’all missed the spectacles.)

All I can offer is some personal anecdotes in the quest for comprehending “universal goodness”, and I thank you in advance for your judgements, because sometimes it’s hard to know whether you are right or wrong in a situation.

In January 2012, I was in such a poor financial state that I borrowed £1500 from Wonga (a short term lender in the UK). On the date I was due to pay it back, I blocked my bank-card, phoned them up and said “Yo! Wonga, not paying this shit back. See you in court, bitches” to see what would happen.
They sent me a rainforest worth of red-topped, threatening letters, all of which I ignored. They phoned me daily and told me I was in trouble.
I told them they were unscrupulous lenders, and if they’d considered the loan properly they’d have realised it was not a good idea to lend me money.

They were intimidating, bullying and massively harassing, but I never actually received that court summons.
I had no mortgage, family, or possessions of any value (I didn’t even own a TV at the time), but I did have a daddy who’s a lawyer and advised me to wait for the court summons before shitting my pants.
The result of this was that I was able to sit-out an almost two year period of relentless attack from Wonga’s various recovery departments.

In 2014, following a serious and thorough investigation by financial services governing bodies, the UK media was alight with stories of the poor lending practices of some short-term lenders.
In February 2015 I received an email from Wonga apologising for them offering me an illegitimate loan and a statement that I was no longer liable for the £1500. BOOM. One for the little guys!

Legally, I was a massive winner, but where did I sit morally? I’ve never been comfortable with the law directing my moral compass, the law is, unquestionably, an ass.
When  I clicked “accept” on that loan agreement, I knew that I wouldn’t be able to pay them back, so was I in the wrong?

Realistically, they must have known that too, because I’d honestly declared that I only earned £1200 pcm… so how the fuck could they think I’d be able to magic up £1500 in a month and still pay my rent and eat? Dumbasses.
In reality, they didn’t think that. They thought I’d be forced into a long term repayment agreement to save my credit score and they’d make more money out of me; a route I’m sure many of their customers took because they were not in the position, emotionally or practically, to withstand the collections department’s bullying tactics.

Who was more immoral in that situation? I expect it depends on perspective. Neither party was perfect, nor either party perfectly wrong.

This was an agreement between me and a massive, faceless organisation; it’s not really comparable to an agreement between friends or professional acquaintances, is it? You should be able to trust those people with your money, right? Or is lending money always a gamble, whomever you lend it to?

In my early 20s, I went to a casino and ripped £1200 off a Roulette table after the dealer trebled zero when I was using a “system” of pressing winning bets. I was £1180 up after 3 spins and I was booking my taxi home before the dealer had cut out the chips to pay me.
A friend was also in the casino and he’d lost the £100 he’d come in with and asked to borrow £50. I chucked a couple of ponies at him, not thinking how he’d pay me back, but actually not caring, because I was buzzing from winning a large sum of money (for me).

I never got back the £50, and I really didn’t care. Perhaps I have the wrong attitude about money, but if I have it, I’ll throw it about; if I don’t, I’ll smell some flowers and not give a shit.
Just under a year later, I was horribly skint three weeks from payday, as my partner and I were partying hard, gambling, drinking and spending far more money than we had. We didn’t care, life was good and money meant nothing to either of us.
The friend from the casino had a nice bink and won £2500 from BJ and Roulette on a night out. I asked him if I could borrow £50 to buy food and coffee for the rest of the month, he refused on the basis that “he never lent money to friends”. 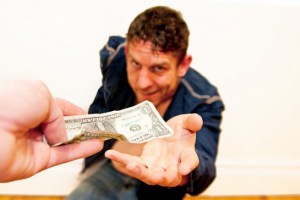 Never. No matter how much money he had, he NEVER lent money to friends… not even ones he’d borrowed/taken from.

I could have reminded him of that £50 in the casino a year previously, and he’d probably have given me the money, he’d have felt obliged.
I didn’t want him to feel obliged, I wanted him to act like a I would act as a friend.

I just stopped being his friend. It did not feel like a loss, we just didn’t have the same view on life, so the friendship was a waste of time anyway.
I didn’t think it made him a bad guy, he was still funny and clever and a good father and nice enough bloke, but I couldn’t call him a real friend anymore, because, at the very core, we were just too different.

I didn’t run about the place slagging him off, but if anyone asked me, I told them both stories, like I just have you. Loads of people decided he was a cunt for acting like that, and I did what I always do, defended his right to be a cunt, if that’s who he is. I do that because maybe he’s not a cunt, maybe we just have a different perspective on the world, perspectives that can never align.

I don’t believe there are more scummy people in poker than anywhere else, and, perhaps naively, I still believe most people are fundamentally good souls who do their best to live their lives within their own set of standards, which is all any of us can do.
The obnoxious jerk at Rob’s table wasn’t a bad guy, he just wasn’t Rob’s kind of people, or mine, or probably yours, but that doesn’t make him scum. Just like I wouldn’t be scum for telling him to shut the fuck up and doing my best to get him barred.

Sometimes people fall short of our standards, and sometimes we fall short of theirs; sometimes there is a massive shortfall, and those people annoy us too much to have any sort of relationship, whether professional or personal.

Be you, do you, as real as you can, life is too short for fakery and falsehood. If you have the opinion that someone is behaving badly in the poker world, or in the wider world, call them out, loud and proud!

Sociopath Test: How Cold Are You?