UnibetOpen Bucharest: After The Event

I returned from UnibetOpen Bucharest on Monday, and I was going to write this yesterday but I was so exhausted, I had to sleep all day.
I’ve been drunk three times in the last eighteen months, and two of those times happened in the last week at the UnibetOpen in Bucharest! It has been a very long time since I went almost a whole week with no more than four hours sleep a night, and my creaky old body needed to recuperate.

If you missed my blog post from a couple of weeks ago, then the short version is that Unibet invited me to come and play a ladies event and the €1100 Main Event over in Bucharest, Romania. They covered all my expenses and all they asked me to do was to write-up my experience on my return.
I did warn them that I can be exceptionally caustic, and if I found the event disappointing, then I would write my honest opinion.

From what I understand, excluding the entry to the Ladies Event, I was essentially on a standard UnibetOpen Main Event package, which can be won from a €4 starting point via their online satellite structure, with the only difference being that they booked my flight for me instead of giving me cash for expenses, which made perfect sense.

The venue was “The Grand Hotel Bucharest”; no, nothing to do with Wes Anderson or a very camp Ralph Fiennes, although The Grand Budapest Hotel is a great movie.

The Romanians know how to build shit, seriously. The People’s Palace in Bucharest is the second largest building in the world, and that seems to be the general vibe of buildings there.
The hotel was massive, impressive and made me feel like a princess the minute I stepped out of the cab onto an actual red-carpet.
Unibet obviously didn’t build this hotel, but choosing a venue is massively important, and they picked a superb one. There appear to be some slightly stricter gambling controls than I’m used to in the UK, so I don’t know if Unibet had a massive range of choice or not, but either way, it was a fantastic place for a poker festival.

One of the best bits about it, aside from a great room, great staff and amazing city, was that the hotel lobby was so extensively vast that there was always somewhere to sit and chat.

It sounds like a small thing to worry about, but consider how many times you’ve busted live games, been ushered out of the tournament area, and then had nowhere to go but your hotel room!
During this week, it was not possible to cross the lobby without finding a group of people to sit down and have a conversation with. This was, by far, the most social poker festival I’ve ever been to.
I can’t quite put my finger on whether the layout of the venue was key here, or whether the Unibet regulars are just super-friendly; probably a bit of both.

I met so many new people, and they were all cool as fuck.

I am the kind of person to gate-crash a conversation, sit down with strangers and say hello, and sometimes it doesn’t go well! This week, everyone I spoke to was welcoming, open and really cool, from Unibet staff down to random players. The whole atmosphere was really matey and relaxed, I’m not sure how it happened, but it was brilliant.

I love to sit up all night chatting absolute shite, and the opportunities for this were endless; I felt like I was at University again, spending time with smart and interesting people, talking about everything.

The events were really well organised, and the tournaments were under the supervision of my beloved Nick O’Hara and his hard-working team. As soon as I see that guy wafting about, I know I’m playing in a well-run and secure game. I was really pleased to see that Unibet understand the importance of having a massively experienced TD in a low-stakes festival.

The start-times of a couple of events were pushed back due to the huge numbers the Main-Event attracted (603 uniques), but this was communicated early, clearly and in multiple languages, so that was no problem.

The festival schedule was varied, and the side events were in line with the Main Event buyin. I bought in direct for a €115 game because even I can afford that when I’m on holiday. Okay, it’s outside my micro-roll, but I wasn’t thinking “poker”, I was thinking “fun”, and I certainly got my money’s worth in that respect.

Unibet also forked out for quite impressive media coverage, which is sometimes left out of lower stakes tours because these media types are bloody expensive.

I like to see it, because it means that all low-stakes and recreational players get a photo to share, or a mention, or a chance to be on a TV/feature table.
This works for the business because it improves the reach of the brand, but it also works to pull new players into the game.

My mum watched the Twitch stream because I was on the feature table, then, because she liked the commentators’ banter, she continued watching! My old mam watching poker for six hours; I was gobsmacked!

Hilarious that she has never played a hand of poker, but suddenly had an opinion on some Romanian guy’s 3bet shove! She’s now up for playing a game on Unibet… my mother, whom I would have said was the least likely candidate for ever being interested in playing poker; it just shows the potential effect that creating a social buzz around poker can have on feeding new money into the game.

If my mother starts to have better results than me in poker, I will be devastated, but if Unibet encouraged even a hundred friends/family to get involved, then they’ve done a great service to the poker economy.

One of my biggest issues with low-stakes tours is always food and drink. I’m a fatty, and I like to eat a lot, meaning that if I get a ticket to an event, the cost of food and drink for a week can really add up, and sometimes results in me not eating properly.
This didn’t happen at UnibetOpen! As well as my breakfast being included in the package, there was a daily players’ buffet, and it was tasty as fuck. I’ve managed to put on about ½ a stone this week… thanks for that, Unibet!
It’s not actually Unibet’s fault that I ate four pieces of cheesecake a day, but I’m not about blaming myself for my own gluttony, so I have to blame someone.

I’d been pretty open with David Pomroy (Marketing Manager for Unibet Poker) that I would be very honest in my review of the week, so I kept my eye on the way people who don’t write gobby, aggressive blogs were treated, and they were all treated like gold too.
The drinks vouchers were flowing, Pomroy (and the rest of the team) were always visible, always friendly, and were dealing with players’ queries 24/7.

They all worked like absolute dogs for the whole week, and everyone I spoke to felt like they had a personal contact over the course of the festival. There is a real sense that they are all insanely passionate about poker, and genuinely respect the low-stakes qualifiers at their events.
This makes everyone feel important, and for some low-stakes qualifiers, who have to grind “normal” jobs and sometimes have quite hard lives, it’s amazing to be made to feel like a valuable part of something special; if you qualify for a UnibetOpen event, you will be treated like royalty, whoever you are.

I rarely comment on “Players’ Parties”, because I don’t really see it as part of the event, and if they are held in the venue with a male to female ratio of 95%/5%, they’re just giant sausage-fests that I can happily avoid.

The Unibet party was in a great venue, and mixed with locals; they organised transport to and from hotel and they really looked after us in terms of making sure we all had a great time (got pissed for free).

I had a top night, even as someone who isn’t a huge fan of nightclubs and dancing, it was the overall atmosphere that I enjoyed, and somebody at Unibet worked hard to make that happen.

I played three tournaments over the course of the festival and cashed for a massive €0, but I didn’t seem to care. For the first time ever at a low-stakes event, I felt like the poker was almost incidental, a side-attraction in a well-organised holiday week.
I think this is how it should feel to recreational players, because if we’re zooming off purely to win money, and there is nothing else for us, then the potential is for us to think we had a shit week.
A €1100 event attracts some very decent players, and although the field was softer than I expected, I still wasn’t in the top end of skillz at any table I sat at. This means that the other stuff has to be in place for me to have a good time, and UnibetOpen provided the experience.

Unibet is the fastest growing low-stakes poker brand, and I believe this is because they care most about recreational players, have a dedicated team that work their arses off and the people with the power truly and deeply care about the future of poker. 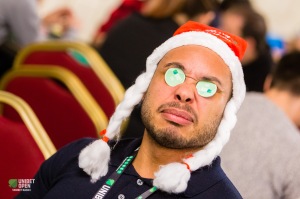 The only negative thing I can say about the UnibetOpen Bucharest is that it ended; I did not want to come home, seriously, I had a little cry when my plane took off because it was over.

If you’re not playing on Unibet and trying to qualify for the next UnibetOpen, then you’re a mug, get on it IMMEDIATELY and I’ll see you there to chat shit, get drunk, eat food and… what was that other thing? Oh yeah, play poker!

See all videos at: https://www.youtube.com/user/UnibetOpen/videos