Women? Poker? That’s What She Said. 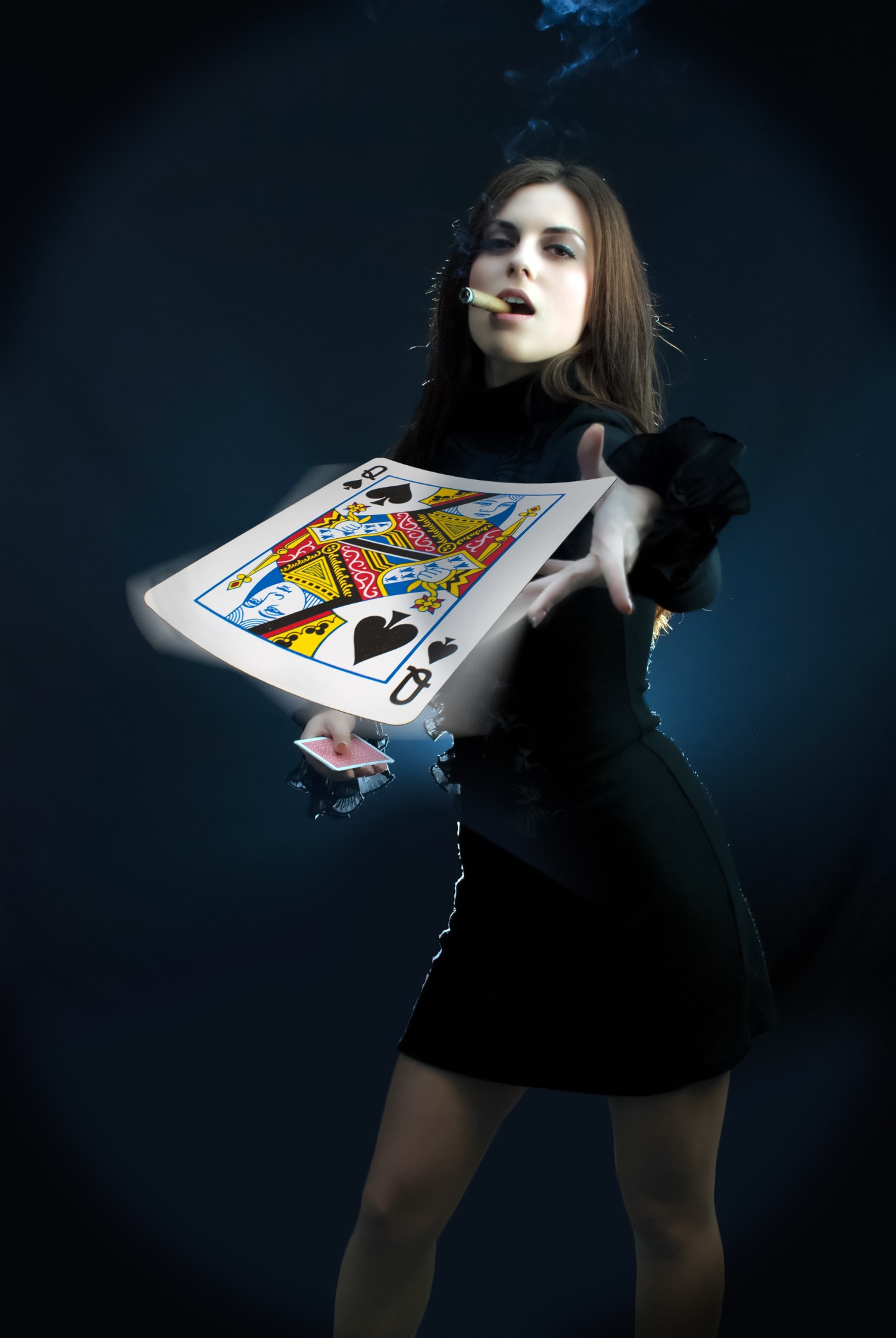 I’ve been asked a a couple of times recently why I don’t write about “Women In Poker” more often, and the truth is that I’m not sure I have much to say on the topic.

There seems to be some pressure on me to write about “Women In Poker” because I am a woman in poker. Quick check of purple heels, false eyelashes and vagina, yep, yep, definitely a woman, definitely into poker.

I am also an ex-Gender Studies student, so I could easily pump out 1500 words on “what constitutes a woman” or “the identification of otherness in relation to gender” or somesuch flouncy tosswaffle, but I doubt anyone would want to read it. I wouldn’t want to read it, I wouldn’t even want to write it.

When discussing anything related to gender, the microcosmic particulars are always very relevant to the macrocosmic situation. By that I mean, for example, male poker players cannot be blamed for a tendency to make sexist remarks to female players, that situation is caused and supported by a world much larger than any poker room.

When discussing a minority group, and it’s fair to say women are still a minority presence within poker, it’s easy to just allow one person to speak for a whole group, when they can’t.

I guess I can only look at myself, and how, if at all, I am able to speak about, or for, “Women In Poker”.

First up, I know I am very sexist.
When dealing with an unknown male player, I will assume he is:

All of these things are sexist, but until I have some other information, I have found these assumptions reliable enough as a sound starting point.
I know I am more likely to succeed with light bets and raises the more girly I look and the lower-cut my top.

I have also learned that this does not apply to all men. Some are gay, and some just think I’m terrifying and ugly; although the same tactics would work from an object they did find sexually attractive. Shame on you boys that those tactics work, and quite a lot of the time.

The downside of dressing like a drag queen, is that it can instantly alienate other female players who just think I look like a twat. I suppose the truth is that there are just not enough female players for me to have to design an appearance strategy around them.
Live poker rooms are mainly dominated by men, and the average age is around 40- there’s no polite way of saying it, it’s an easy market to work.

The other main way I prove how sexist I am is the way I treat women at a poker table. I do some of the things I accuse my male counterparts of doing. I can’t say I am more interested in oggling boobs than playing poker. I’m all for a bit of boob-oggling, but not in poker time. It could well be a tactic on her part, and I’m not falling for it.
I don’t care how nice your boobs are, I’ll still try to knock you out; I’m a woman, I can get laid whenever I want, I don’t have to think about sex at a poker table. 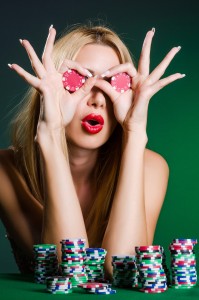 I definitely assume another woman is a soft target, and I always assume she has a strong hand if she is betting.
How stupid am I?
How sexist am I?

I really don’t know which is paramount in that last statement, stupidity or sexism. I am a woman, I am not the soft target when I’m playing at my usual stakes, I make light bets in good (and bad) spots all the time.

How could I be so stupid and sexist as to sit opposite another woman at a poker table and assume she won’t be capable of doing those things because she is a woman?

I knew what she had. I did not ever think she would call.
I don’t think it was a bad call.
I just didn’t think she’d make it, for no reason other than because she’s a girl.

That is terrible poker, whichever way you look at it.

I have been playing a few of the women’s events on PokerStars recently. There has been an element of ‘solidarity’ about those tournament decisions, I like to play massive field tournaments, with large prizepools and 200+buyins uptop, not 50 runner nitfests.

See… “nitfest”, I did it again, that is sexist, assuming a tournament will be a ‘nitfest’ because it’s an all female field.

I’d be mocking a male player for saying something like that, and yet, it rolled off my fingertips very easily.

In truth, I have found these women only events to be quite nitty, super hard to extract value early on, but easier to squeeze later on. On the rare occasion I made it to “later on” without bluffing all my stack off in the first five levels. 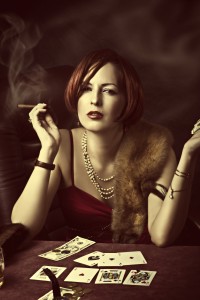 In the first few I played, I marked every player with a purple tag to make sure I knew that I was playing a woman if I came up against one of them in the future.
BRAND THE WOMEN, DO NOT LET THEM WALK QUIETLY AMONG US.

A few days later, I made a bluff against a purple marked player. I think it was a fairly good bluff, and my (obviously female) opponent could only call the bluff with a big hand.
She had the stones, and I was out. I wouldn’t have made that move on a player that I only had 40 hands of data on if I hadn’t marked her as a ‘woman’, as ‘a soft target’.

I must be a slow learner, because no matter how much evidence I receive to the contrary, I still feel that I’m going to be a better player than a woman, because she is a woman.

I wonder how much money that will cost me before I wake up?

I often hear that there are not enough “Women In Poker”; I think there’s plenty at the moment, because it’s a group of players that I’m losing to, so I don’t want that group getting much bigger before I mature my sexist, backwards poker game.

In the long run, it’s better for poker if people, of any sex, race or age want to play some cards and have a fun time. So yes, I want more women in poker, and men, and grannies and uncles and children… wait, no, not children. They’re not allowed, I’d be mortified if they beat me.

This is probably not what people expect from a piece about “Women In Poker”. I probably should be preaching solidarity, singing Gloria Gaynor and having a pillow fight, or some shit.

The truth is, that away from the outside world, poker is not a time for solidarity, it is not a team sport. I shouldn’t focus on, or ignore, “Women In Poker” any more than I do on any other group given a random assignation.
Poker is all about me, my own decisions, my own mistakes; it doesn’t matter if you’re a bit more, or less like me in this way or that, at the poker table, you are always, respectfully, my enemy.

If I want to be the best player I can be, I should think less generally about “Women In Poker”, and more specifically about “My Opponents At This Table Right Now”.

Maybe I have never written a piece on “Women In Poker” because I had nothing useful to say. It would seem that I’m sexist against men and women at the same time, and am therefore probably not qualified to be writing a gender-related blog.

In the end, my comment on “Women In Poker” is that I suppose I’m glad they are there, because it was only the absurdity of being sexist towards another woman that highlighted the leak of sexism in my game.
It’s all very well thinking men are adorable and dumb, but some aren’t, some are vicious and smart, and have their eyes on my stack.

Being sexist is a clear leak in my game, in a variety of ways, and I think I have only noticed it because of other women at poker tables.

I need to keep my eyes on the prize, not the boobies, and not be too distracted by gender stereotypes, in either sex.

From now on, I’m going to be thinking about “People In Poker”, and ways to get money from their pockets into mine.

One thought on “Women? Poker? That’s What She Said.”