A-Game? A For Amateur.

I’m forever reading about people’s “A-Game”.
“Yeah, yeah, I won the Super High Roller McJigger, I got some luck, but I was playing well. I really brought my A-Game. Yep. Rolled my B through Z-Games up in a picnic blanket, put them in the boot of my Volvo which I then drove into the ship canal. A-Game all the way!”

This is probably just further evidence of me being a cantankerous old witch, but I expect professional players in any sport to bring their A-Game every time they play.
I’m not a football fan, but I am privy to a lot of football dissection conversation, and I very often hear the phrase “we were playing well” about Premiership football teams.

I should bloody well think so. Premiership footballers are world-class, professional sportsmen and they are handsomely remunerated for their dream job of playing football for a living. If they can’t give the impression that ‘they are playing well’ to groups of sofa-bound vessels of heart disease, then they probably shouldn’t be playing at all. Millions of boys (and girls) dream of being professional footballers; A-Game should be default position for these people.

If you get paid £20k just for having your morning shit, you should be bringing your A-Game as a matter of course; if you’re not up to it, then there’s a massive queue behind you.

Poker is no different, I expect the world class players to show me exactly what A-Game means. World-class professional players have days off to prepare for events. They have the money to stay in a nice hotel with a spa and be comfortably transported to and from the cardroom. They can afford to eat healthy, balanced meals and generally spend time getting into a good mindset to play gruelling multiday events. They don’t always do that? Not my problem.

I’d had to work the night before anyway to get the next week off, so I got 3 hours sleep and bombed down on the train, sweating a week’s worth of luggage into the casino cloakroom and managing to late reg just in time. I hadn’t eaten, drunk or showered in a very long time.

I played like a demon. I ground out double starting stack without a showdown before unavoidably doubling a short stack with KK against his AA. I played well against a cold deck and some strong, aggressive players. A big pot with bottom set that I ingeniously escaped from with my life left me about 13bigs which I launched with AQdd from hijack against a habitual EP limper when a Mister Nit was on BB. Limpy had QQ, I shook his hand and I ate some breakfast.

I think I was on form that day, as on form as I can be expected to be as a recreational amateur. I definitely will have missed some value spots, I will certainly have been too nitty and scared against players I identified as better, and most obviously, I probably didn’t gear up quickly enough against the structure of the tournament. Even if I play the best I can play, I’ll be doing all these donkey things, because I’m not a world-class player; I’m a micro-tard satellite qualifier with a sweaty arse-crack and a dream.

Later that week, I met a brilliant chap, called Reza. He was wealthy as all-holy-fuck and was popping off £500 bullets like his designer wallet was a diamond studded AK-47.

He’d already made day2 with a formidable stack, but was “having another couple of goes for practice”. Really lovely chap with absolutely no game at all, seriously, my B-Game on a lazy day would have had him running rings. In that heads up match, I was Manchester United First Eleven versus the Romney Village Under 11s.

I was out before him; shhh… that’s not the point.

I made one mistake in the £500 event that I couldn’t recover from. I know I made the mistake because the guy showed me a bluff, and afterwards I worked out that actually I probably could have called about 40% of my stack with A high on the river, and I played the pot okay up until then. One of those marginal, large field decisions, the right side of a thin line on which world class players are made. I made the wrong decision, but I’m not sure the right one was within even my bestest A-Game; hindsight and hand analysis are painful learning curves.

My A-Game will slap some other players around, but in a £500 field, I’m likely out-A-Gamed in many spots. If I’m honest, I would have been utterly thrilled with min-cash in this event, I was in for £50. I’m happy to admit I would have been pleased with my A-game being ‘(Slightly) Above Average’. I didn’t even min-cash, I busted early on day2 in a dull fashion. A for Awful.

Poker is the only sport where I can bring my amateur game and sit down with the same starting stack as a world-class player and take them on, fair and square, in their own tough fields. 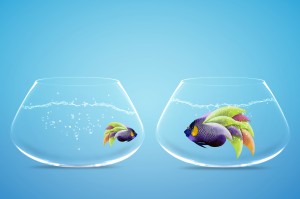 If amateur footballers play, Wayne Rooney isn’t going to jump in goal (he’s not a goalkeeper, is he?). If amateur snooker players have a game, Steve Davies won’t have to bring his A-Game to beat anyone (wait, is he a darts player?).

I’m not just trying to demonstrate why you should never have me on your pub quiz team, I’m trying to make the point that poker is the greatest sport in the world. In the sport I play as an amateur, my best game, however straggly, undisciplined and sketchy it is, is still a good enough game to sit at the same table as the professionals, the world class money, the top-notch A-Gamers.

Whether my game is sneaking in the back-door via a pennyroll or just being so rich that my last hobby was buying yachts and blowing them up, if I grind up, or buyin, big enough, I’ll get to play with the best in the world. And maybe, just maybe, on a day where their head is up their arse, because they’re hung-over and reading a blog piece about themselves on their kindle and they don’t even manage to bring their Z-Game, maybe on that day, I’ll manage to find my “A-Game” at the same time as a whiff of luck and just maybe, I’ll beat them to a title. Or at the very least, grind a min cash out of £0.01.

I know my place, but just by playing, I’ve put myself in the queue…