The Opinionated Boob: A Dealer’s Shame 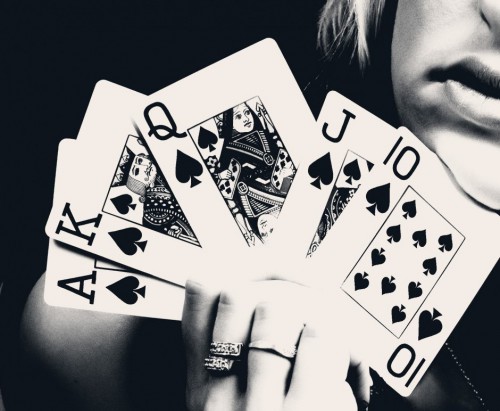 I’m fast, I’m accurate, I control the table, I’m strict, I know the rules and I can get the players chatting to eachother.
In addition to all those honed technical and social skills, I have a cracking pair of tits, which seals my position as the best NLHE dealer in the whole damn world.

I took a dealing gig this weekend, partly for money and partly because I haven’t dealt ‘properly’ in years and I thought it would be fun. There is the added element that I’ve just started writing/grinding full time, and am not adverse to spending six days straight in the same underpants without having any human contact outside my flatmate, Steven, who occasionally taps on my skull and asks if I want a brew.

It was fun, and the money is good, given the very low stress levels generated by the work. I saw people I knew, made some new friends, ponced about in a decent hotel and had a lovely time.

Turns out I need my tits though, because, actually, I’m a terrible dealer.

I don’t know when that happened.

I only trained a batch of new dealers 18months ago, and they all turned out really well! I must be the best dealer in the world… there was a time I was dealing rowdy cash games in the busiest poker scene outside London. I’m a card delivery genius…

In one hand, I shuffled the cards and dealt the flop before pitching the down cards. Now, if you only play poker, then you might think this is quite cute and funny. To a dealer, it’s not funny, it’s the professional equivalent of a valet starting the engine of a vehicle and driving it straight into a wall.

All dealers have done it; but surely not the best dealer in the world?

My shuffle has gone to crap as well. I used to be able to shemmy shuffle the cards (the bit where they squiggle the cards face down all over the table) riffle shuffle twice (two halves of the deck perfectly interlocked and pushed together) strip shuffle once (about 25% of deck peeled off placed down) riffle again, cut and deliver 20 cards within 25seconds.

This weekend was closer to a minute, and cards were slipping out of my hands, my nails were too long, I kept splaying the deck as I went to cut.
I regularly got confused with the action, nothing detrimental, I’m a player and passionate about the game, so I can smell a big pot brewing and I’m always fully alert. I mean tiny things, like telling a guy his ‘raise’ was a string-bet, when it was clearly just a call.

Or not instantly knowing the exact min raise amount when a guy accidentally 3bet due to the chips he threw in. It was 25points enough for min raise, and I nearly missed it, then had to count the raise outloud to make sure I’d got it right. Embarrassing times for someone who loves to boast she’s been dealing over a decade.

I think I have to change that statement to “I was a dealer nearly a decade ago”.

Despite all the dealing difficulties, I managed to blag it because I have been working as a cardroom manager more recently, so my people skills are more refreshed. It’s surprising what you can get away with if you can be reasonably charming, and moreover, suitably contrite when you fuck-up, which I can.

I think my worst infractions came, not from my dusty technical abilities, but from the fact that I have been playing a lot more poker, but mainly a lot more online poker, which does not train one’s “poker face”.

My next door neighbours must assume I have a very specific Tourette’s tic as they hear me shout “OH FUCK OOOOOFFFF” at the luckboxes/my own terrible play at all hours of long days and nights.
I excitedly squeak when they bet into my massive hands, and audibly chat through my own confusion when they make tricky bets. Too many hours online will make Johnny a live-table telegraph, and that’s what I was this weekend.

I’m a diligent dealer, and I repeat the action as soon as I understand it. This helps me and everyone else keep abreast of it, and stops any disputes eg:

“I thought it was a call, or I wouldn’t have raised.”

“Well I said raise, I repeat every action like a total robot, so it’s a raise. You’ve re-raised.” Strong dealer- no dispute.

I cannot help but be interested in the game. I like to watch, to put the players on ranges, imagine the next action and the response. I am a poker geek, I just can’t help it.
The problem is, when there was an action that I thought was stupid/unexpected, I could not keep the surprise/condescension out of my voice as I announced the action.

An example: There was a UTG min raise and four callers to the button, who 3bet, only slightly above minimum re-raise. I almost snorted with derision as I announced “raise”.

It was my “oh-so-great-and-Lordly” opinion that his 3bet was too puny, whether he was betting for value or trying to rob that pot, and I think I made my opinion clear. I believe two players identified my opinion of that guy’s bet.

One of them was in the pot and proceeded to 4bet a very sensible amount.

The lame 3bettor folded, as did everyone else, the 4bettor looked at me as I passed him the pot. I felt uncomfortable, like a cheat, somehow. I don’t really know whether my obvious amusement at the lamest 3bet to ever have been made in a NLHE game had any impact on the other guy’s decision, but it might have done, and that’s pretty bad.

My opinions of what players are doing with their chips are not important when I’m dealing, and they are not what I’m getting paid for. If I have an opinion about a player’s holding, and I share that via any form of communication with another player at the table, I’m a cheat.

I do not want to be labelled a cheat, there’s no number of fantastic breasts that can overcome that association.
I’ve long been a believer that there is room for many different types of people and personalities as dealers in poker rooms, because of the uniquely diverse customer base. Some customers love a chatty, cheeky dealer, some love a silent machine; there is an entire spectrum to cater for.

There is never any room for a dealer who affects the outcome of a hand by leaking their worthless, undesired, unimportant opinion all over the table like a wobbly waterbed with a slow puncture.

If any of the customers I dealt to this weekend noticed/were affected my disrespect of the fact that you paid me to provide an impartial service, then I sincerely apologise; I am ashamed.

It’s okay for me to write a blog after the fact and say:

“I cannot believe the overall standard in a £220 live comp. Most of you would get destroyed at NL$50 online. Seriously; this field is soft as baby poo.”

It is never okay for me to have those opinions at the table, not even as a player, but absolutely never, ever as a dealer.

It’s not because I believe dealers are “staff” and should therefore “know their place”, but because nobody should ever affect another man’s hand. If you are not in the hand, you should shut your hole and give NO advice/instruction/information to anyone, through any medium; if you do, you are a cheat.

Great boobs are undeniably a useful, socially-constructed asset, but as a poker player, or dealer, they in no way supersede a great poker face.

I need to spend more time sharpening my personal and social skills, and less time thinking about breasts; advice good for poker, and life in general.

I care that I wasn’t up to scratch, read about what happens when dealers don’t care here.

4 thoughts on “The Opinionated Boob: A Dealer’s Shame”