Poker Culture: A Spiral Of Silence?

A couple of weeks ago I wrote a blog slagging off DTD. I went there, and felt like they didn’t have a product designed for me, like I didn’t really belong there as a micro-stakes player, and I had a rant about it.

At the end of the blog, I flippantly mentioned that I would probably get barred from the venue, and a few people have told me that is probably the case. I quote one private message directly:

“Rob doesn’t like it when people tell him he’s wrong.”

To be fair to Rob Yong, I didn’t “tell him” he was wrong, I splurged my genuine opinions in a consciously clickbaity style on my blog, without speaking to him or emailing him first. I don’t blame him for barring me, because I did not give him the chance to answer, in private. I used my experience in the club to write something I was pretty sure would get a decent response, fair proof that I’m a bit of twat.

He could arguably be protecting his other customers from exposure to me and my foul mouth and flatulence. It’s his club, he can do what the fuck he wants, from barring someone like me, right up to running it into the ground because he won’t listen to what his experienced staff tell him: 100% his prerogative.

What I did find very concerning, is the large number of inbox messages that I received from people saying that they agreed with me, but that they didn’t want to write on message boards, or FB, or anywhere else they might be seen, because they do not want to be barred themselves. That blew my mind!

That participating in a discussion about a venue that is supposed to be the epitome of British Poker might lose someone their membership to the club is ridiculous, and frankly, not very British.

It might be unfair to Rob Yong, there’s no proof (that I have) that he would actually bar someone from DTD for commenting in agreement on a blog that slags him off, but it’s irrelevant, because obviously, many of his loyal customers feel like this would be the case.

This is so concerning to me because poker, and gambling, build their foundations in honesty and integrity, and times and places where players cannot be honest cannot be good for the industry overall.

In the case of DTD, it gives me a better insight into what I think are terrible business decisions, because those who agree with him do it publicly, and many of those who do not are scared and keep it in private. That has to present to him a false image, that a majority is in agreement with him; in the process, the product of a poker institution is damaged, and a shroud of dishonestly descends on us all.

I know why people don’t want to be barred from DTD, there’s a constant stream of overlays! You would have to be daft to live close to Notts and not play there regularly; there is regular value, and it would be destroying a massive edge if you were to draw negative attention to yourself and lose access to that value, that edge.

At the table, during the live game, angle shooting repeatedly (where identified by competent house staff) can often result in warning and penalties.

The circular nature of poker is such, that repeated angle shoots are often what results in concrete rules being written.
For example, most regular live players know the rule that “a single chip, thrown in without comment, will be taken as a call”. That must have originated from some clever bastard working out that he could play that trick to his advantage. After he’d tried it on enough times, groups of cardroom supervisors would get their heads together and work out a way to stop one smart guy having an unfair, technical advantage over the less smart guys.

Testing the rules, sticking your neck out, arguing with authority, all these things have changed poker, in fact, they have changed the world.

I am very worried about a poker culture where players are scared to criticise, or are discouraged from looking for the angles within the rules.

A good friend of mine, Mr Laptop, is currently barred from Grosvenor Casinos in his locality because they think he did not play fair in a recent BlackJack tournament they ran.

Mr Laptop is a regular, experienced poker player, he’s a smart guy, and a giant loudmouth; that said, he is very honest. He will be rude in his manner, and insensitive in his word choice, but he won’t lie to you. He will never break a rule, he likes rules, he likes to know where he stands, and if you make it clear what the paradigms are, he will stay firmly within them.

If, however, you leave a tiny leak-hole, he will probably find it, and exploit it; a naturally litigious guy, he just can’t help it. He won’t hide what he’s doing, it won’t be a secret, he will most likely rub your face in the fact that you are stupider than he is, and that’s how he beat your badly constructed system.
It’s bloody annoying, hard work, can be quite hurtful; but it can also be very useful. I know that if Mr Laptop can’t find a way to operate between the lines of the rules, then the chances are those rules are rock solid and reliable, which is exactly what all rules should be, but especially those relating to gambling.

In this case, Mr Laptop spotted a gap in the written rules of the BJ tourney, it wasn’t a massive issue, just a tiny oversight on Grosvenor’s part, but an oversight none the less.

Mr Laptop worked out that by turning up at an exact time, with an exact amount of friends, they could monopolise the tourney scoreboard and squeeze a couple of hundred quid out of Grosvenor Casinos per day. It wasn’t foolproof- had Grosvenor had a massive uptake on the BJ tourney, then his system was not helpful, it did rely on low overall numbers.

It did not rely on any cheating mechanics, or require anyone to lie. His system did not rely on misleading anyone, fixing equipment, or a staff member getting involved. It was a simple oversight in the writing of the rules, and the smarter poker brains would have been able to identify the leak pretty quickly. This tournament was being run in multiple casinos, marketed to poker players, and I can absolutely guarantee that Mr Laptop was not the only poker player who spotted this leak and took advantage of it. This is the inherent nature of serious poker players, a nature very necessary to long term success at a poker table.

The difference with Mr Laptop is that the lanky ape can’t keep his damn mouth shut; he’s a clear-cut type of chap, and in his opinion, if it’s not written in the rules, he’s not cheating, and if he’s not cheating, then he has nothing to hide. Good logic, sir!

And yet he’s been barred.

I’m not entirely sure what Grosvenor Casinos think his barring will achieve. I do not believe there is any way it sends out the message that “one should not find leaks in game rules”, what it says is “if you do find a leak, keep really quiet about it”, and I am not sure this is the right way to think.

Mr Laptop did something that will have an eventual positive outcome for everybody, and yet he is now barred from the largest and best poker product provider in the UK. Hmm, summat’s not right there! 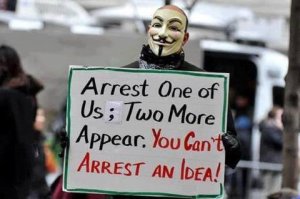 I hate the idea that the gambling and poker culture is one where honest opinions, open actions and free discussion come under a sense of intimidation.
Since I was a wide-eyed, youthful idealist, I was always proud to work in an industry that was so much more upfront than many others- admittedly it was encouraged/forced by the strict legal controls on gambling in the UK, but it is still a great thing.
All gambling customers know where they stand, you even know how a casino makes money, it’s in a leaflet in the foyer!

I find there to be a stark dissonance between my belief that the UK gambling/poker industry is fully upfront, honest and reliable, and the idea that people would be barred for openly agreeing with a negative comment, or because they honestly play within the rules of the games offered.

Poker attracts strong characters, and intelligent people, which is a recipe for brutal opinions, and subtle system manipulation; this is the environment in which poker operators open their doors, and I feel like barring people is them closing their eyes to that environment, and sends out the wrong message.

Just because you shut your eyes, or “sweep something under the rug”, doesn’t mean it’s not happening. Barring the people who agree with complaints on your venue does not help your bottom-line, banning the guy who loudly told you about your oversights does not stop the quiet ones continuing to beat the leaky system elsewhere.

Grosvenor Casinos will be dealing with Mr Laptop for a long time if they stand by that barring. He is the human equivalent of Water Torture, and I am sure he will continue to argue his viewpoint until he physically runs out of breath. If they do let him back in, I am also sure that he will instantly look for leaks in the next promotion they run, he cannot help himself.

Unlike the end of the last blog, I don’t think I’ll be barred from Grosvenor, having worked for them for a decade, I know that they enjoy criticism! DTD should take note there, customers of Grosvenor can say what they like about the product, and there are enough staff and venues that somebody, somewhere will be listening.

I have been to enough Grosvenor cardroom supervisor meetings to know that it is not always “corporate” who deal with complaints from players, or incidences where rule leaks are highlighted, it it most often the front line staff who talk about and make decisions on what to do; that’s how Grosvenor managed to keep a gobshite like me interested in being part of the team for so long.

In this case Grosvenor made a mistake in the writing of the rules, and then another in the way they handled Mr Laptop, in my opinion. I hope they change their minds and let Mr Laptop back in, and I hope that loyal DTD customers feel empowered to tell Rob Yong where they think he’s going wrong, even if they do it in a more delicate way than I did. It is not my nature to be delicate, I’m a ranty bitch; but it’s not the only way to make your voice heard.

Poker is honesty, poker is clear understanding and poker is change, development and growth, and I don’t like any indication that the major operators are doing anything to suggest that they don’t agree with those statements.

There’s no benefit to operators to shut their eyes to a problem, or an oversight, and as players/customers we all have to speak up. That is how something is improved, in poker, gambling, and life in general.

4 thoughts on “Poker Culture: A Spiral Of Silence?”